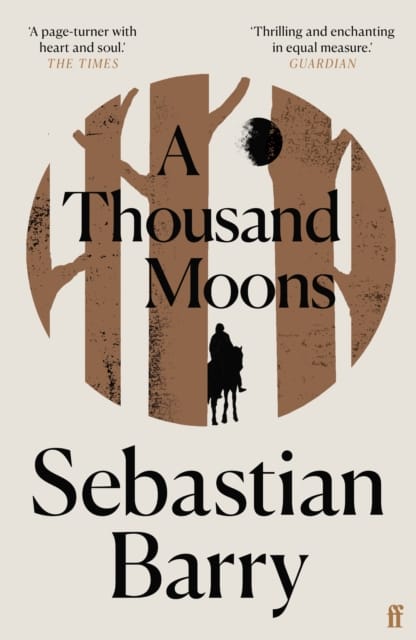 “A Thousand Moons” by Sebastian Barry

For those of our readers who enjoyed Sebastian Barry’s “Days without End” this will be a very obvious choice as many of the main characters are the same from that book, but the years have moved on and the book is located in Tennessee in 1870s.

Those who have not read the earlier book, spoil yourself and read “Days without End” first as I think you will get that much more enjoyment in reading this new novel, which is not so much a sequel as following on with the life of Winona a Lakota orphan, now aged 17-18, who was rescued and adopted by two Army soldiers. Equally, I should add, that as I read her story I rather wished I had reread the earlier one, a tip for those who might be interested.

Winona lives with Thomas McNulty, her new “Mum” and John Cole and they cohabit with Lige Magan on his tobacco
farm. She benefits from an education, in comparison to Peg, a fellow Native American orphan, who she befriends. The farm household is closely knit with two sibling ex-slaves, good characterisations, all seeking a safe life, but Tennessee is a dangerous place. There are wild groups of disbanded infantry, free shooters and linching parties abound. The story follows Winona’s experiences as a young Native girl living and working in a mixed society.

What brings this story out from others is that you would not know that it had been written by one of Ireland’s finest male writers; there being little hint of his usual adroit skills at providing his readers with a window on Irish life. It reads like a Native American tale, well crafted with a good storyline, which is how Winona’s life, and those of the household are turned upside down by a series of dramatic events. Their life is hard, their hours long and tiring, their strong love for one another and as a family unit. The local town, called Paris has a broad mixture of bad folk, and the odd saintly inhabitant like the local lawyer for whom Winona works.

This is not a long novel, and it is an easy read; but the authenticity of the story comes along very strongly and praise is due to Sebastian Barry for giving us such a compelling story. As an author he rarely disappoints, this follows that excellent track record. If you can do, also immerse yourself in “Days without End” you could soak up a couple of very enjoyable reads and learn some good American history of their Civil War, and how the country sought, and fought to re-establish itself.