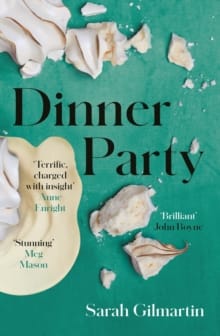 Dublin Halloween 2018. Siblings meet up for a dinner party, an annual memorial meal. Not necessarily a happy occasion and this year, it transpires, less so than others. Kate Gleeson is hosting her two brothers and as ever there is one absentee, Kate’s twin, Elaine who died twelve years previous. Kate’s life has never been the same after her twin, with whom she shared everything, was suddenly taken from her.

Kate spends the day preparing for her family even carefully making a Baked Alaska, though as the dinner party unfolds and emotions are revealed, tensions rise, all is far from calm. Kate never serves this dessert, and later she is left alone and bereft.

Kate’s relationship with her two brothers is good, Peter the elder one who took over running the family farm in Carlow after their father died, and Ray who now lives also in Dublin, with his wife Liz, who also attends the dinner party.

The book itself looks back on their early lives, and particularly those of the twins. The brothers’ childhoods and careers are woven into their sisters’ story and how Elaine died.

There is one other crucial character, absent from the Dublin dinner party, their mother, Bernadette, who is a very complex individual, who influences her off-springs’ lives in many ways. She has a fiery temper, so life in the farmhouse was never uneventful.

The twins were always very close but their interests were very different, Kate liked music, Elaine had a horse. She was more wayward than Kate who lived a bit in her sister’s shadow, but always in the eye of her father.

As the book unfolds over the years looking backward to life in Carlow in 1999 and 2006, moving to Kate’s University years in Dublin and her somewhat mundane job as a receptionist at the time of the dinner party. Sarah Gilmartin reveals the family’s lives and how they find themselves sitting around a table remembering their absent sister.

In summation, a good read by a new Irish writer. Looking at life in Ireland over the recent past decades, no mention of the Troubles, just the trials and tribulations within a well characterised farming family.