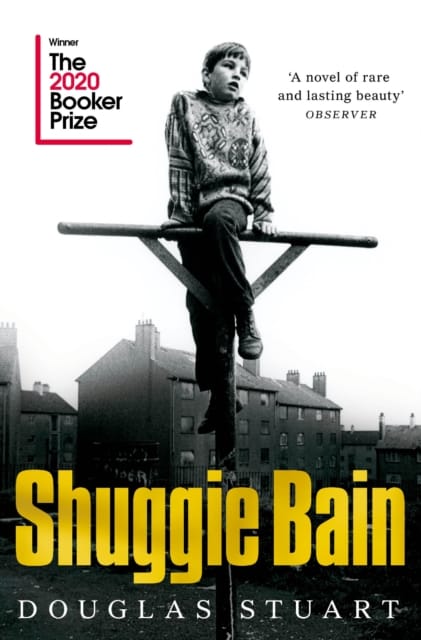 This is the much praised winner of the Booker prize in 2020, a first novel from Scotsman, Douglas Stuart. Carrying such an august accolade should not put anyone off reading it, since that award is sometimes a turnoff. Is it a worthy winner? That as ever. is down to each individual reader!

However, this is not the book for anyone who is offended by bad language, but then it is written by an author who was brought up in and around the rough tenements of Glasgow, and who is using that experience to give a seemingly very realistic eyewitness account of a very hard childhood. Shuggie Bain grows up in Glasgow, a city reeling from Thatcherism, closing dockyards, ensuing unemployment and extreme poverty, leading to alcoholism, depravity and a soul destroying outlook.

Fundamentally though, it is a filial love story, the love of Shuggie, given name Hugh, for his alcoholic deserted single mother, Agnes. Of his devotion to her throughout the 1980s, even as she fails him, which is chronicled chapter by chapter; the influence of beer and vodka ever present in her degradation.

We witness Agnes being deserted by her taxi driver husband, but he first takes his family away from her parents high rise flat out to the “Pithead” estate which adjoins a closed mine. He promptly leaves Agnes to bring up Shuggie and her two elder children, Catherine and Leek [Alexander] in an area where most of the neighbours are all apparently cousins to each over. Agnes maintains a pride in her home and her own appearance throughout a decade of self destruction; this self-respect a catalyst for further abuse from the residents of this deprived Council offshoot.

Shuggie is a bright effeminate boy but a loner, bullied at school. Leek remains at the family home in a supportive role to Shuggie after their sister marries and moves to South Africa. The two brothers spend much of their time caring for their drunkard mother, and the abuses she imposes upon herself and incurs from men, and the locals. It is hard to feel sorry for Agnes, yet Shuggie as a young boy deserves respect for his dedication to his mother.

This is not an easy read; but Douglas Stuart has produced a good novel. It is more accessible than the 1994 Scottish winner of the Booker prize, “How late it was, how late” by James Kelman, where the dialect demanded hard work to comprehend the story. This is, in that respect, is a much easier read linguistically, and there are certain sections where the author’s skills deserve respect and admiration. Is it a worthy winner of the Booker prize, that as ever is the reader’s decision.