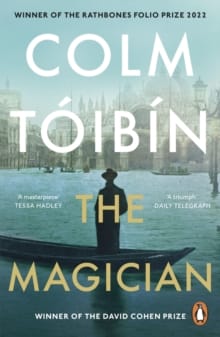 “The Magician” by Colm Toibin

This is a very readable fictionalised biography of Thomas Mann, the German author of “A Death in Venice” amongst many other early 20th century classics. Mann being the Magician of the title as he used to perform conjuring tricks for his many children when they were young, and he became known within the Mann household as “The Magician”.

Any reader does not need to be a fan of Mann’s writings to enjoy this book or even to be aware of what he wrote. Mann lived to be 80 years old, witnessing and experiencing two World Wars. As I read this novel it reminded me in someway of William Boyd’s totally fictionalised “Any Human Heart” where the reader is presented with an historical view of roughly the same time period with real characters, like the Windsors, enlightening the pages. Here Colm Toibin is using his obvious admiration for Thomas Mann, and comprehensive research to provide a view of the family life of Mann, and a window into the world events his predecessor lived through.

Thomas Mann was born in Lubeck in 1875, and whilst his family moved to Munich after his father’s premature death, he always remembered his roots and set his first novel on his home city, and family background. We follow these early years as he passes through education and establishes himself as a writer, bearing witness to his family’s change in circumstances. Toibin paints an excellent picture of the time period, and how the Manns adapt. He then introduces us into the privileged household of Katia Pringsheim. Thomas marries Katia and over the years have six children. Katia’s family has Jewish origins, even though they do not attend the synagogue. Her faith will have serious ramifications on the Mann family, their childrens’ lives, and eventually forces the parents to resettle in America to avoid Nazi persecution.

Thomas Mann though a loving and faithful husband, does have a wandering eye for young males, these thoughts and views Toibin adroitly presents to the reader. Some of his children have their own sexual preferences which the author unfolds and as the family matures and travels some of the off-spring become known in their own right. Thomas Mann himself was a very successful writer of both fiction and fact. He was awarded the Nobel Prize for Literature in 1929; he and his family were famous and notorious, the reader of this novel bears witness to all these events, family holidays, books being written and published to great success, providing fame and wealth and all the pressures that this imposes.

This book, very much like the author’s earlier novel, “The Master” about Henry James, allows his reader to learn about Thomas Mann and his writings in a very informal way. The clearly defined years lead us through the decades of his life, Mann’s writings and the family upheavals, tragedies as well as happiness, then fear and uncertainty. International recognition having both benefits and drawbacks. Mann is portrayed as a dedicated professional writer right up to his final years and his death in Switzerland in 1955.

A good holiday read and an interesting historical record of some of the events of a century ago.