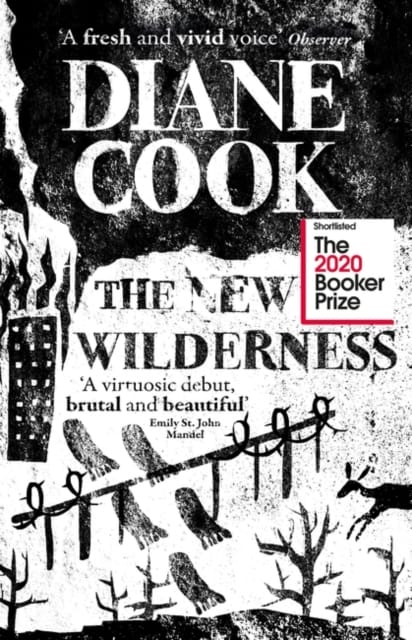 “The New Wilderness” by Diane Cook

This is a book I have been meaning to pick up and read ever since it was short-listed for the 2020 Booker Prize. There are always reasons when, being surrounded by books all day, I can delay opening some titles, but I was glad that I did venture inside this first novel; though Diane Cook has also published, to acclaim, a volume of short stories, “Man v. Nature”

The author has created a world where her principal characters, Beth, daughter Agnes, and partner Glen move to escape the City, a nameless polluted metropolitan concrete jungle where Agnes’s life has been at risk through ill health. The atmosphere so contaminated that they have little alternative other than to become part of Glen’s concept of a trial band of people existing in a natural wild state. A group of just twenty assorted individuals who are eventually approved by the Authorities to conduct this experiment but under strict regulatory conditions.

By the time we meet them that band of twenty has already been diminished. Agnes’s health is also starting to improve. We witness her growing up into a nomadic existence as the Authorities do not allow them to stay put. They are harassed and assessed by Rangers, mostly objectionable, and adherence to “The Manual” is obligatory. They must clean up after themselves leaving no trace of their passing. They become adept hunters, and whilst there are mishaps, the surviving band of individuals travel distances across a landscape which, as you read, is a daunting geography to navigate.

The book is divided in two as it begins with Beth as the primary narrator, until Agnes takes over also establishing herself as the lead tracker of their routes across the vast unspoilt Wilderness, though the polluted world is ever close by. They are instructed to head to a location where the river is dead, but here meet up with The Newcomers. A band of new recruits to bring their numbers back up and who update the “Originalists” about conditions in the City. These new arrivals bring in other youngsters who help refresh the story and the equilibrium within the Community alters. Leadership is always an issue. Some of the other characters are more pressing in their search for dominance all of which brings out some bad traits, although some goodness still survives, in others. It is the relationship between mother and child, Beth and Agnes, which is the backbone of the novel, we witness little of other parental trials and tribulations, but those of these two principal narrative characters bring into stark reality how fraught these can become. Their surroundings and Agnes’s natural bonding to the nature she has grown up with makes her a formidable young adult.

Whilst there are a plethora of other individuals within this band of travellers, it is the author’s description of “The Wilderness” it’s beauty alongside harsh deserts, mountain ranges to be scaled and vast expanses across the plains of horizons that bring the novel alive. Diane Cook is good with words, her writing is easy to read, the pace constant as their lives unfold the new enlarged Community becoming threatened by some outside influences and the ever returning Rangers who seem to materialise at odd periods within the story to make their lives more difficult.

The story is all set in a futuristic world. We never get to know too much about the City and how awful it is there but what they have left behind can only make us think of how important it is that we treasure this world that we enjoy, though one we have already damaged far too much. As I read “The New Wilderness” I was not thinking this was an Environmental novel but it certainly can be read as one shouting out a warning.