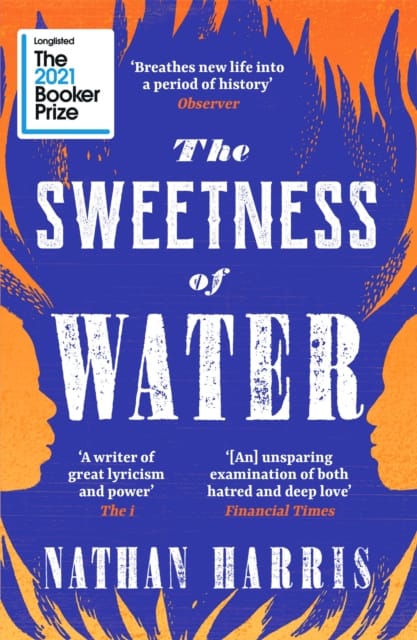 “The Sweetness of Water” by Nathan Harris

Set as the American Civil War is in it’s closing stages in a town called Old Ox, in Georgia; the story is based on the relationship of local resident, and landowner George Walker, and his wife Isabelle and the bond they build with brothers Landry and Prentiss, newly freed slaves from their neighbour’s plantation. George meets them hiding in his woods soon after he has learnt of his only son’s supposed death in the war, this devastating news conveyed to him by Austen Webler. The two lads grew up together and being best friends enlisted in the same unit of the losing Confederate side, though, supposedly in a protected posting, due to Austen’s father’s wealth and influence.

George takes his time to tell Isabelle about their loss, something she will naturally hold against him; but their separate sorrows are more than compensated for by their son, Caleb’s safe return, which leaves questions to be asked of Austen, and the relationship between the two boyhood friends.

Meanwhile George has created a bond with Landry, who is basically mute, and Prentiss, and they have moved in to the barn on the farm and are helping George to create a peanut plantation. For a man who has never bothered to cultivate his land, but lives off his inheritance, this is a new experience. However, though this venture was started as a way to overcome the loss of his only child, when Caleb returns, he also becomes a willing hand in this enterprise.

Both George and Isabelle have their own close friends, Mildred, a strong minded widow, and for George, Ezra, his father’s old friend, and confidante and adviser. Both characters have their special roles in the unfolding story, and the support they provide.

As the war ends; all the slaves are free, and no longer owned, but most are rootless, and homeless, squatting in town. George’s employment of two from the adjoining farm, causes fractures in the locality and within Old Ox itself, and he becomes ever more isolated from the community, and antagonism rises against him and his project.

Meanwhile the relationship after the war between the two friends Austen and Caleb provides the second strand to the story-line; Caleb’s father Wade pushing his son forward into the family business, and a suitable wedding with all the right connections. Caleb tainted by his working with the brothers on his father’s farm.

These strands provide a tinderbox which explodes and drives the characters and events forward so that each of the main players discover new things about themselves, and their loved ones.

This novel nominated for various awards including the Booker prize 2021, is another story about slavery, but in this instance what can happen to freed men and women. The historical setting so soon after the end of hostilities is well presented, and having read and enjoyed several novels over the last few years with a theme around slavery this is a good addition to this oeuvre.