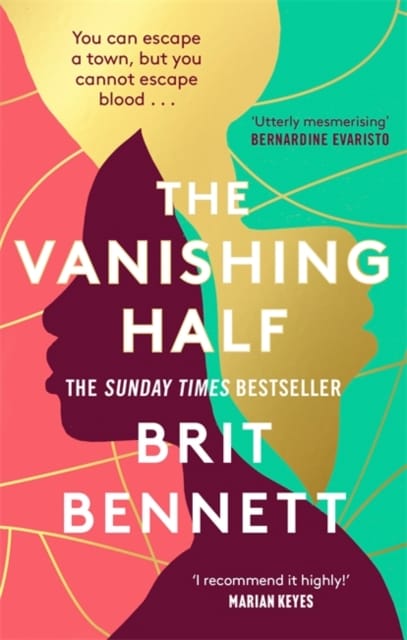 “The Vanishing Half” by Brit Bennett

This book has been a best seller in the States, and justifiably so. It covers an unusual angle of American society, as it follows the lives of twin sisters, Stella and Desiree. The book is about colour as both girls, though of African origin are white, and in the case of Stella, she spends her adult life “passing” as white. They grow up in the Louisiana town of Mallard, which by all accounts does not exist on any map, it is a town where the residents have managed colour, so Desiree’s eventual return causes a stir.

Their childhood was traumatic, and as teenagers, having been forced lo leave school, despite academic promise, they are sent by their widowed mother out to earn their keep.  The monotony of their lives propels them to up and leave home, setting off together to New Orleans where they falteringly establish themselves. Stella eventually finding herself secretarial work, while Desiree continues on more menial tasks. Then one day Stella vanishes, moving with her wealthy boss, who she eventually marries. They end up in Los Angeles where they have a daughter, Kennedy, and live a comfortable life as a white family; Stella never disclosing her background to her husband, or over the years to her daughter.

The book opens in 1968 with Desiree returning to Mallard, walking in holding the hand of her daughter, Jude, who is black and therefore stands out in this community. She is escaping an abusive marriage. Mother and child settle back into the family home where her own mother Adele still lives and working as a cleaner; her life unchanged by the sudden departure of her daughters, but she welcomes Desiree back in as though no time has passed. Desiree had herself moved onto Washington D.C. where she worked for the judiciary on fingerprint identification, a role she cannot replicate back in Louisiana, so she finds work in Lou LeBon’s Diner.

A decade on, Jude, a bright student and an athlete, moves to Los Angeles, on a sports scholarship to study medicine. There, as luck would have it, she is working as a waitress at a smart L.A. party when a woman identical to her mother walks in. It is her aunt, but she is unaware of this and then over the next few years is fixated to discover the truth. The cousins meet and become friends, of a sort, but their different upbringings, and Kennedy’s privileged life means that they are never equals. Jude pursues her medical career, self funding her studies with partner Reese; while Kennedy aspires to be an actress, unaware of her mother’s past.

We follow these families, plus Adele’s partner Early Jones, an unusual individual!, through the politically strident years of America as far as 1988. The simple complexities of each of their lives, and how the twins, so close as children, survive apart, make this a very fulfilling read. It is an unusual story told from a particular angle, “passing” something apparently common in the States that maybe we are not so well acquainted with on this side of the Atlantic. A satisfying, interesting read with a myriad of support characters who embellish the main story by a novelist who will be worth looking out for in the future.