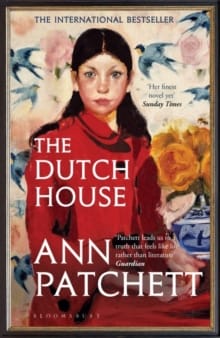 “The Dutch House” by Ann Patchett

It is always a pleasure to pick up a new novel by Ann Patchett, who I saw referred to in some article as a possible successor to Anne Tyler, and that is some accolade! “The Dutch House” is a worthy addition to her library of good reads.

The story focuses on brother and sister, Danny, and Maeve Conroy who grow up in the house which in itself is a formidable presence in this storyline, and is a character in it’s own bricks and mortar rites. They move into the house as children, but their mother never liked it, and their childhood is blighted by her leaving them, her husband and the house to go off to India to help others.

Their father is in property, made some money, and bought the Dutch House as a surprise for his family. It is a striking presence in the street in small-town Pennsylvania. They exist with the assistance of Sandy and Fluffy who help them grow up and remain a constant link throughout the book, but their adolescence is interrupted by the arrival of Andrea, very much the wicked step-mother, and her two daughters. When their father dies suddenly, she ejects Danny from his home, with Maeve, seven years older was already working and able to provide a basic roof over their heads.

Their father’s will only establishes a fund for education, so Danny finds himself pursuing a career as a Doctor. He would have preferred to succeed his father in property development.

We watch their lives with them spending odd hours parked outside the Dutch House reminiscing, but the book follows decades of the siblings lives and careers, and how Danny and his own family move forwards in part replicating his parents experiences.

There are many side characters within Danny and Maeve’s story, they are supported by the house and their own work colleagues and acquaintances which as the book draws to a close add further dimensions to this intriguing tale.

Any fan of Ann Patchett who enjoyed “Bel Canto” or “State of Wonder” will not be disappointed in this read; to curl up under a shaded umbrella in the summer sunshine would be a wonderful way to enjoy this book. Highly recommended,