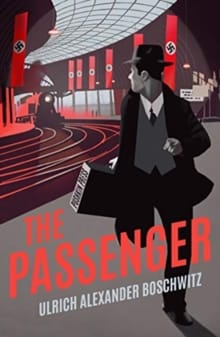 “The Passenger” by Ulrich Alexander Boschwitz

This novel unearthed and republished in Germany during 2018 is now available with an English translation, but at the moment only in hardback. It focuses on the efforts of Otto Silberman after the violence of Kristallnacht in November 1938, and him trying to escape the persecution of Jews by the Nazi regime.

This is not a violent read, but insightful of the sudden change to many Jewish lives after these events, even if the warning signs had been there for residents to see. The author Ulrich Alexander Boschwitz was of Jewish origin who had already emigrated to study abroad and the bibliographic details contained in this book are worth reading; the author’s short life, itself eventful, and sad.

The story of Otto Silberman and his Christian wife, Elfriede, centres on how Otto escapes their flat when the Authorities knock on his door whilst he is discussing a business deal. He leaves down through the rear exit, and is then, for the rest of the story on the move – “The Passenger” of the title. Their son, Eduard, is in Paris and is trying to obtain visas for his parents, but much to his father’s chagrin, not seemingly making any progress. During the story there are a few phone conversations between the two.

The reader is also witness to the negotiations that Otto does with his WW1 wartime friend and now work colleague, Becker, who like other acquaintances takes advantage of Otto’s predicament to fleece him. It is however these auxiliary parts of the story that make Otto’s tale more interesting and enlightening, as without them it would be very much his itinerant life hopping on and off trains.

However the main structure of this unusual book is those journeys, and Otto’s travels to and fro from Berlin, the city where he started and returns to as each avenue of escape becomes blocked. He encounters a strange mixture of travellers, many like him equally wary of their companions. The author provides us with some insight on how those days over 80 years ago must have been, the terror, the uncertainty, and the sheer uprooting from what had beforehand been a comfortable family life in a country that had been so dramatically radicalised over the previous ten years.

This has been a quiet bestseller, the history of the novel’s republication, and of the author’s short life creating interest. It has become justifiably, a word of mouth recommendation. A readable fictionalised account of a period of European history that should not be forgotten.